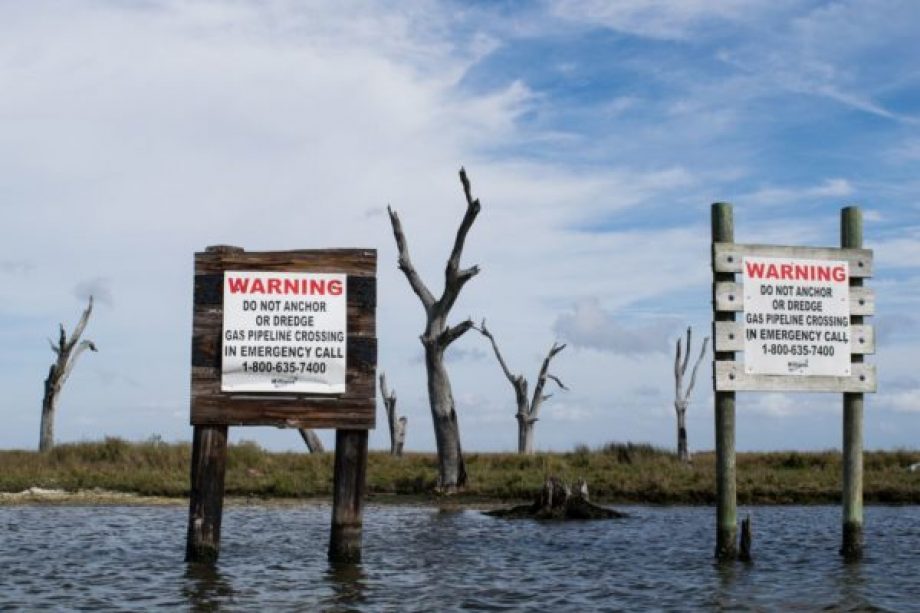 Disappearing Landscapes in Louisiana: When Google Maps Can’t Catch Up

WE’VE ALL BEEN there when Google Maps goes horribly wrong. We’re on our way out to dinner when it tells us to turn onto a ramp that doesn’t exist. Or we’re frantically trying to find an alternative route around the parking lot that is the highway when our GPS has us make a U-turn, on a one-way street, going the wrong way.

Occasionally, it’s the phone’s fault–it gets hopelessly confused and reroutes on its own accord. But, the fault isn’t always on the GPS, no matter how much we yell at our phones.

You see, we as humans have a knack for rapidly transforming the landscapes within which we live, at times making it difficult for Google’s imagery to catch up.

We can erect complex highway structures in a matter of years and reconfigure our streets to include bike lanes within months. All in all, these relatively quick alterations and outdated maps are annoying, but harmless. They add maybe 20 minutes to the drive–and a bit of road rage.

But sometimes, changing our landscapes does worse than causing us to make the wrong turn.

It’s mid-January of 2017 and my research partner and I have taken a two-hour drive south of New Orleans, past the levees and into the bayous. We’re on a powerboat, with Donald Dardar, Chairman of the Poite-au-Chien tribe, at the helm. He’s acting as both a historic and ecological guide to the waterways he’s been navigating his whole life–playing as a child, working as a fisherman, showing visitors like us the ins and outs of life on the water.

According to Google Maps, we should be on land. But we’re not. We’re in a boat. We’ve been snaking through channels in Louisiana’s coastal wetlands for nearly a half hour and have now reached what appears to be open water stretching out towards the horizon. From where we’re standing, there is no visible land between us and the Gulf. Still, it’s no surprise that my phone thinks we’re on solid ground.

Here, in the marshes beyond New Orleans, coastal communities are seeing some of the most dramatic environmental changes happening in America today.

On average, Southern Louisiana loses a football field of land to the Gulf of Mexico every hour. Between 1932 and 2010, Louisiana lost nearly 2,000 square miles, an area as large as the entire state of Delaware. As Louisiana’s landscapes transform into seascapes at an alarming rate, it’s not just land that’s lost. It’s people’s histories, their livelihoods, and their homes.

Over the past year I’ve been traveling across the United States and U. S. Territories with my research partner to refocus America’s climate change story on the people who are living on the front lines of our eroding edges.

We’re creating a database of hundreds of interviews to better understand how a warmer world is changing the way we live in America, and to better identify what can be done to empower and support people like Donald that are in need of adaptation today.

We began this project with the goal of telling America’s climate change story. It was a story we thought we knew. A story of disappearing land, flooded homes, and people on the move. Climate change in America is all of those things. But there’s another part of the story we didn’t know until we saw it. This is the presence of strong local leaders who are doing everything they can to adapt their homes to the consequences of climate change we can no longer avoid. It’s the mayor in deep-red Alabama who, once the door to his office is shut, asks how much time his town has and what else can be done to protect it. It’s the activist in Miami who spends so much time hounding local officials about the social impacts of climate change on minority neighborhoods that she ends up on the city’s official sea level rise task force.

At a time when the new administration denies the very existence of climate change, it can be easy to throw up your hands and say we’re doomed. But the spirit of American ingenuity lives on–in New Orleans, in the bayous of Louisiana, across our coastlines. And it is driven by strong, passionate local champions. While we may be changing our landscape beyond what Google Maps can recognize, and we will inevitably see some difficult times ahead, the America I have seen over the past year is creative, inspiring, and not ready to surrender itself to the rising seas.

The full version of this post originally appeared in America’s Eroding Edges in Ocean Views at National Geographic here.