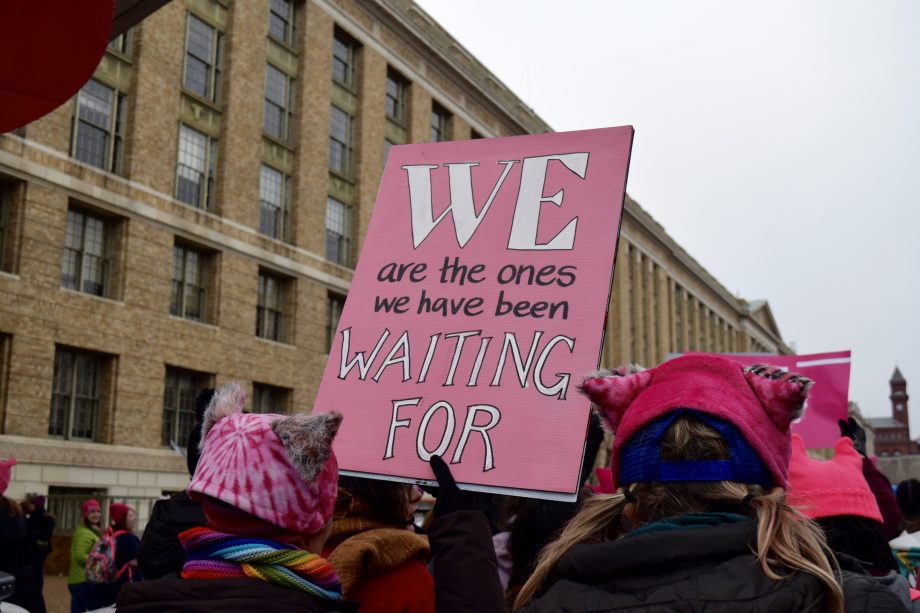 #WhyIMarch: For All The Creative Women

My best friend and I boarded a bus at 5 am on Saturday morning bound for Washington, D.C. It was filled with many tired women, tired because it was 5 am and because the day before a man who stands for misogyny, bigotry, hatred, and greed was named the 45th President of the United States. We all slept soundly for we knew we would need our energy and strength for the hours, days, months, and years to come.

As we made our way from Union Station to The Capitol, my friend and I looked on in astonishment at the growing number of people equipped with armor in the form of signs, buttons, sashes, and woven pink pussy hats. The more women, men, children, and dogs we saw, the more energized we became.

As we stood surrounded by an army of angry, loving, emboldened women, we noticed just how creative these women were. Their signs ranged from the simple and straightforward (One read, “Nope.” And another read, “Oh, hell no!”) to the poetic (“Viva La Vulva!”, “Organize, Agitate, Educate, Must Be Our War Cry.” and “This is the First Day of the Next Four Years”) to the hilarious (“It’s our CUNTry Not Your DICKtatorship” and “Trump, I’m on my Period.”) to the overall inspiring (“We Won’t Disappear From The Website,” “Why I March,” and “We Cannot Succeed As A Nation If Women Are Held Back.”)

As Gloria Steinem spoke, “We are here and around the world for a deep democracy that says we will not be quiet, we will not be controlled, we will work for a world in which all countries are connected. God may be in the details, but the goddess is in connections. We are at one with each other, we are looking at each other, not up. No more asking daddy. We are linked. We are not ranked. And this is a day that will change us forever because we are together. Each of us individually and collectively will never be the same again.”

As Angela Davis spoke, “This is a women’s march and this women’s march represents the promise of feminism as against the pernicious powers of state violence. And inclusive and intersectional feminism that calls upon all of us to join the resistance to racism, to Islamophobia, to anti-Semitism, to misogyny, to capitalist exploitation.”

And as Madonna performed, “Express Yourself” and “Human Nature”.

And then I thought of my mother who has survived two cancers, the death of both her parents at a young age, and countless other hardships with an unfailing grace, warm spirit, and undying love for me. I knew if she was able, she would have been marching by my side that day.

“I don’t think I’ve ever been more proud of you than I am right now,” she texted. I looked up from her text only to see a sign that said, “We are the ones we have been WAITING FOR.”

I marched in the Women’s March on Washington on Saturday because I work for an organization that advocates for all New Yorkers to have access to safe and affordable housing, that promotes equitable economic development policies, that is a champion for community development groups that are working tirelessly to lift the voices of  those most disenfranchised in New York City.

I marched because I am part of a podcast hosted by a creative woman who has witty, smart, and bold conversations with a new fellow creative woman every week. It is also produced by a feminist man, both of whom I consider to be mentors and friends.

I marched because President Trump announced his plans to eliminate the National Endowments for the Arts and Humanities, and reinstate the Global Gag Rule that bans NGOs from receiving federal funds if they mention abortion. And more regressive policies and actions just keep coming.

I marched because I am a creative woman who deserves to be treated with respect and kindness, who deserves autonomy over my own body, who advocates for those who cannot advocate for themselves, who recognizes the need for love and compassion in a time plagued by such hateful rhetoric and destructive public policies being introduced every day.