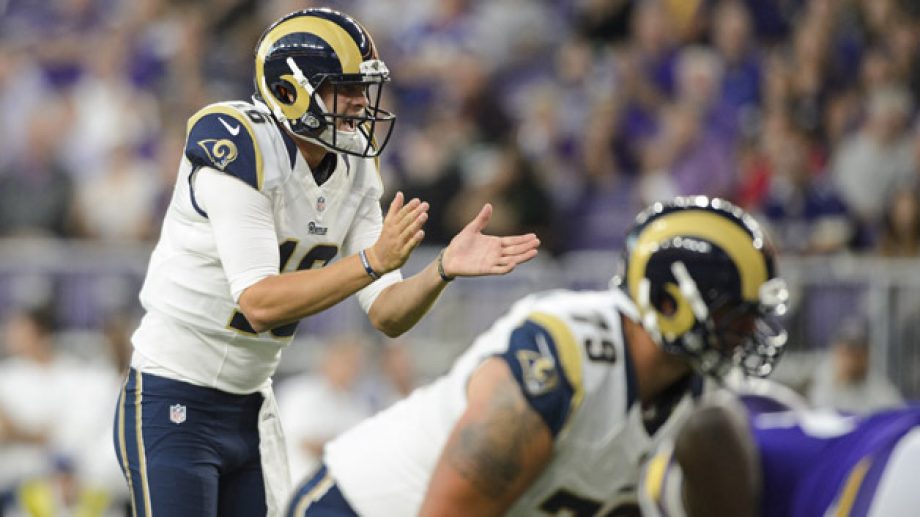 AM I THE only one who finds it hard to believe summer is fading? Good news, though: the Boys of Fall are back!

A couple days away from kicking off a brand new NFL season, it’s exciting to consider the possibilities. The next five months stretch out like a glorious blank canvas in front of us. Absolutely anything could happen! The Rams could bring a new energy in Los Angeles. Tom Brady could return from his suspension with a vengeance and tear up the league. Drew Brees could rack up another 5,000 yards passing. The NFC East could crown a repeat winner for the first time in a dozen years. Steve Smith Sr. could defy his age. The Chicago Bears could shrug off mediocrity. The defending champion Denver Broncos could lose their division chokehold and miss the playoffs. The Jacksonville Jaguars could win the Super Bowl.

As we count down to the first games, it feels a bit like Christmas Eve. With every team starting on equal footing, we should expect the unexpected through the next 17 weeks. But even as we conjure up outrageous dreams, let these words serve as a cautionary tale: Never get too high or too low over what you see on the field — not after the first week, first month or first half of the season. The NFL season is a marathon, full of peaks and valleys, twists and turns, frontrunners and faders, dark horses and sleepers.

Just look at 2015. The Kansas City Chiefs posted a 1-5 record and lost their star running back before rumbling into the divisional round of the playoffs with 11 straight wins. The Houston Texans gave up 48 points to the Falcons and 44 to the Dolphins before getting tough on defense and grabbing the AFC South title. The Minnesota Vikings rode a 30-year-old running back to their first NFC North crown since 2009. The Washington Redskins ran the table in the final month to climb above .500 and win the NFC East. The New York Jets set offensive records on their way to double-digit wins but missed the postseason. The Carolina Panthers and New England Patriots both sported 10-0 marks; neither won the Super Bowl.

At least we know our football teams go as their quarterbacks go. Except when a defensive behemoth continually makes up for a subpar offense — all the way to a championship.

In 2015, quarterback changes served as a primary thread. Nineteen of 32 NFL teams used multiple quarterbacks in the regular season because of injuries or ineptitude. Seven of those 19 needed at least three quarterbacks. Among that select group, only the Steelers and Texans finished with winning records. The Indianapolis Colts trotted out a grand total of five QBs, including senior citizen Matt Hasselbeck, and still managed to go 8-8!

The high-stakes game of musical chairs is already underway among quarterbacks. With the injuries to Teddy Bridgewater and Tony Romo, the Vikings and Cowboys hit scramble mode early. Minnesota traded next year’s first-round draft pick for Sam Bradford which opens the door for rookie Carson Wentz to take over in Philadelphia. When Mark Sanchez couldn’t win the starting job in Denver, he was signed by the Dallas Cowboys before he was even cut by the Broncos. The economics of supply and demand are in full effect under center.

For now, the Cowboys will be directed by another rookie, Dak Prescott. We could also see rookies Jared Goff in L.A. and Paxton Lynch in the Mile High City some time this year. In the season opener, Trevor Siemian, with one prior NFL snap to his credit, will stand at the helm for the reigning champs. His former teammate Brock Osweiler takes over in Houston. Robert Griffin III gets a clean slate in Cleveland, while Blaine Gabbert earns the nod in Chip Kelly’s new San Francisco offense. The Ravens, Colts, Titans and Bengals all welcome veterans back from serious injuries. And Brady, possibly the greatest quarterback the league has ever seen, will be absent the first month of the season.

Predictions about who goes undefeated, who makes the playoffs, who wins Rookie of the Year and MVP honors and who triumphs in Super Bowl LI entertain us in the preseason. But those predictions are mere guesses. We have no idea how the action will unfold. As fans, we know just one thing for sure: the NFL is the best reality show on television. Never short on drama, it’s guaranteed to captivate and entertain from now through February 5th in Houston. As the world spins faster and faster and we kick off the 2017 NFL season, it’s time to buckle up!

A well-traveled veteran and pioneer of sports radio and television, Amy Lawrence is the host of CBS Sports Radio’s late-night program ‘After Hours with Amy Lawrence.’ The show can be heard weekdays from 2-6am ET on the nation’s largest 24/7 major-market radio network. Follow her on Twitter @ALawRadio.

Photo Caption: MINNEAPOLIS, MN – SEPTEMBER 1: Jared Goff #16 of the Los Angeles Rams calls a play at the looks on against the Minnesota Vikings during the game on September 1, 2016 at US Bank Stadium in Minneapolis, Minnesota. The Vikings defeated the Rams 27-25. (Photo by Hannah Foslien/Getty Images)