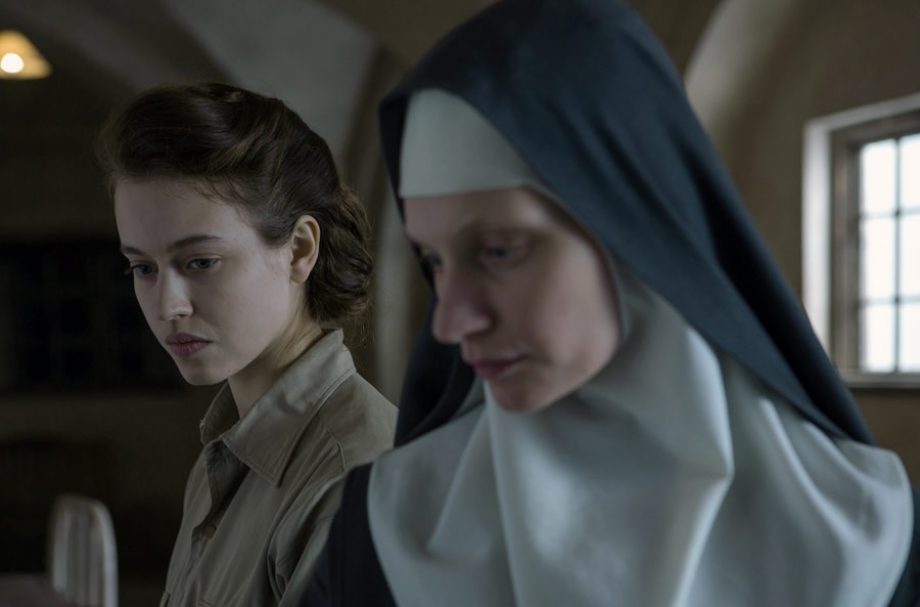 Must-See New Film on Women, Faith, and Rape in War

THE INNOCENTS is an extraordinary new film from acclaimed French director Anne Fontaine. In Polish and French, it tells the true story of a young French Red Cross doctor, Mathilde (Lou de Laâge) in Warsaw after World War II. She is caring for French survivors of the Nazi camps when she agrees, reluctantly, to respond to an emergency at a Benedictine convent. What she finds is shocking.

Soviet soldiers had rampaged through the convent, repeatedly raping scores of the nuns over three days of unspeakable horror. Some of the sisters became pregnant. The Mother Abbess, played with steely self-righteousness by Agata Kulesza, insists the pregnancies be kept secret. She swears the young doctor to secrecy, too.

This intense, gripping and demanding film passes the Bechdel test with flying colors. In addition to its female heroine, it is about women struggling together against incredible odds to hold onto faith in God and humanity. It is about good and evil, means and ends, themes reflected in the choice to film in black, white, blue and all the shades of grey. Mathilde has a love interest in the film, but he is incidental to the plot.

Events and truths unfold through Mathilde’s eyes. She is only beginning her career, yet she will be delivering babies—including by C-section—in the convent, with limited supplies, at night, by herself. And while Mathilde comes without faith, a cynical nonbeliever, she is confronted with cloistered women steeped in faith, committed to modesty and chastity, their trauma intensified by their needing to expose their nakedness to Mathilde to receive care.

Actress Lou de Laâge as Mathilde is riveting. She holds the film together much of the time in silence, the firm set of her jaw, the way her eyes slide ever so cautiously, even in the way she moves, so purposefully, into the darkness. She becomes a bulwark against the devastation the sisters have suffered.

Mathilde does what she does at great risk, taking one of the scarce Red Cross vans against direct orders, driving alone in the ice and snow to the convent through the forest. One night she is stopped at a check point by drunken Russian soldiers. They surround her, throw her to the ground, grope her. Only the arrival of their superior saves her. They force her to turn back, so she spends the night in the convent. Until then, she could only imagine how terrible the nuns’ trauma had been. On this night, choking on her own tears, she knows it in her bones.

As for the sisters, they keep on with their lives, praying and chanting together, the peace of those moments a respite for them, for Mathilde who looks on, and for us. But faith has been a threatened casualty of the trauma. Most articulate about the struggle to hold on to faith in the face of pure evil is Sister Maria (Agata Buzek), Mother Abbess’s right-hand woman and the heart of the film.

Sister Maria confesses to Mathilde that she is unable to find consolation, that she relives those nights over and over. Still, she doesn’t see her faith crisis as unique. “At first you’re like a child,” she explains, “holding your father’s hand, feeling safe. But then the time comes—and it always comes—when your father lets go and you’re lost, alone in the dark. You cry out and no one answers. Even if you prepare, it catches you unawares. It hits you right in the heart.” Despite her travails, Sister Maria emerges with the strength to get the sisters to the other side. “Faith is 24 hours of doubt and one minute of hope,” she says. She’s willing to go with the hope.

The film lays bare how ruthlessly women raped in wartime are judged. It is because of the inevitable consequences of those judgments that Mother Abbess and Sister Maria keep the secret. If the new communist government were to learn of the pregnancies, they fear, the convent would be shut down, leaving the nuns rejected by their communities, thrown out their homes, objects of shame. “Many,” says Mother Abbess, “would die.”

That women so wronged can be looked at with anything but compassion remains a terrible and persistent reality. With a focus similar to the focus in this film, the Remember the Women Institute is bringing to light the sexual violence experienced by Jewish women and girls during the Holocaust; that violence remains, they write, “a secret cloaked in shame.” In Cynthia L. Cooper’s short play The Spoken and The Unspoken, recently presented at a New York City event hosted by the Remember the Women Institute, the main character, a woman, reports on the aftermath of that sexual abuse. After leaving the camps, she says: “The women couldn’t talk about it. Taboo. Damaged goods. Families would toss them out, sit shiva.”

Today, we can add the former Yugoslavia, Rwanda, the Democratic Republic of Congo, Sudan, Nigeria and too many other locales to these sites of horror. Still, not until 2008 did the UN Security Council unanimously adopt Resolution 1820 saying that “rape and other forms of sexual violence can constitute war crimes, crimes against humanity or an…act of…genocide.”

At a time when the church and politicians continually defend forcing women who have been raped to carry those pregnancies to term, this film forces us to viscerally experience the damage of such a callous and unconscionable position. The option of ending a pregnancy is never mentioned, but we are witnesses to the anguish of the alternative.

The lengths to which the Mother Abbess is willing to go to protect the reputation of the sisters and by extension, the church, become clear near the end of the film, leaving us shaken. Still, the Abbess, suffering from advanced syphilis that she refuses to have treated, emerges as a complex character. “I wanted to spare you shame and dishonor,” she tells the sisters. “I damned myself to save you.”

The film ends with a photographer taking a picture of all of the nuns, holding some of the babies in their arms, surrounded by the neighborhood orphans. It is an odd and provocative image of love, hate and everything in between.

That picture winds up in Mathilde’s hands, along with a note from Sister Maria. “The dark clouds have moved on,” writes Maria, “and you are in our hearts. I know, even if it makes you laugh, that God sent you.” Whether Mathilde thinks that’s true or not is an open question. But what this film does attest to is that when we are in crisis, in our lowest moments, desperate and devastated, we can be, we must be, we are God—whatever God is—to each other. It is a message that almost any of us could take away from this very powerful film.