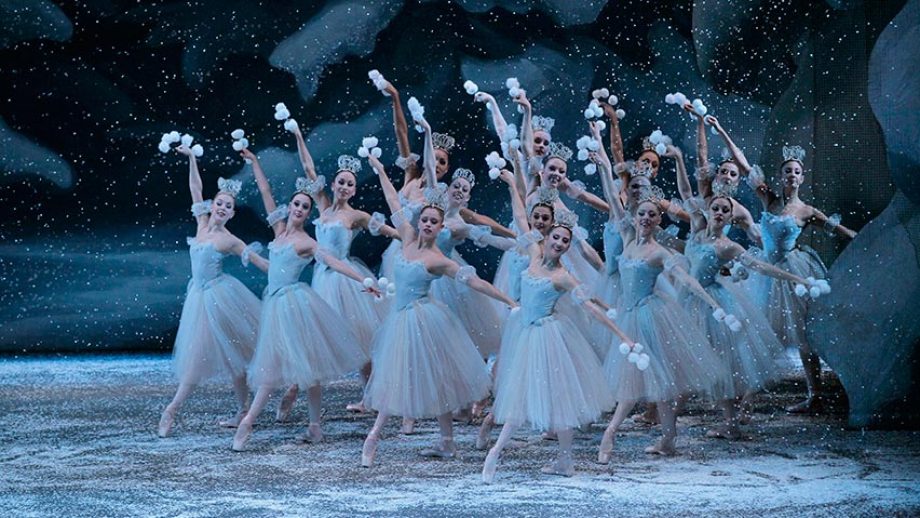 Backstage At The Nutcracker

THIS TIME OF year is very special for me. I was born in December, and my name is Holly. Add to that, a wedding anniversary, celebrating Christmas with the family and ringing in the New Year. But there’s much more to this time of year – the wonderful tradition of the Nutcracker Ballet. Performances usually begin right after Thanksgiving and run through December.

The Nutcracker and I are very connected. From 1985 to 2006, I was the Director of Costumes at the New York City Ballet. Let me take you behind-the-scenes of this iconic production that never fails to thrill and engage audiences young and old.

On Thanksgiving eve, the staff of tailors, drapers, first hands, a shopper, a milliner, a dyer, stitchers, along with a group of union dressers and hair and makeup people are very busy prepping Act I of George Balanchine’s Nutcracker. Following the flurry of last minute alterations in the shop, the last costumes are rushed to the New York State Theater in time for the Snow Scene, which actually comes at the end of the first act. Once the paper snow has fallen, a small army of stagehands moved in, pushing wide brooms to sweep up the snow, often finding a rhinestone stud, or even a lost hanger. The snow is reused night after night. While it might be a magical vision for the audience, it is a nightmare for the dancers.

In the meantime, the dressers are working feverishly. Off stage-right is a curtained green room. It’s previously been used for production and story by visiting companies, but on this night, the corps de ballet women are being helped into ornate Victorian party dresses with horsehair petticoats and velvet cloaks. Each headpiece is secured with hidden bobby pins and makeup is checked in the large full-length mirror next to the elevator. On subterranean floors, young gentlemen have their bowties positioned just so, while little budding ballerinas are wrangled into crackling taffeta with lace and bows by their dressers, their hair pre-curled by mothers in their homes. I will always remember the image of excited little girls skipping down the stairs to the stage door with curlers in their hair, usually under colorful winter hats.

On the second floor of the theatre, makeup artisans are pursing a girl’s doll lips and rouging a toy soldier’s cheeks. Most dancers take care of their own makeup, but there is a professional staff available for soloists and age make up. Usually, the grandparents are played by members of the corps who have some acting chops, but don’t have naturally gray hair or age lines.

If your heart doesn’t feel the Christmas spirit already, it will once the orchestra is tuned and the swell of Tchaikovsky’s charmingly familiar score fills the hall of the theatre. Hearing that music live, year after year, was one of the greatest perks of my job.

Throughout the next day, all of my Thanksgiving trimmings and leftover dishes had to be stowed away, because on Friday morning, I was always back in the shop making sure that every element of Act II was finished and on its way to the theatre. At least Lincoln Center was peaceful and quiet that day, as most people were still at home with their families. I always tried to bring some of the 21 members of the shop to the dress rehearsal. It’s important for makers to get to see their work from a distance both on stage and under lighting. We often can get bogged down deep in the details. It’s good to remember that everything is seen from a distance. It helps put things into perspective.

On that second day behind the scenes, Mother Ginger’s giant hooped skirt is rigged in the air, deep in the back wings of stage left. The dancer is wearing the bodice and hip supports, as well as a huge bonnet with major eyelashes and drag-like makeup. With an army of dressers supporting him, the dancer positions himself under the skirt, so it can be lowered into place. I forgot to mention this saint of the theatre is also wearing stilts!

One year the New York City Ballet decided to film a performance of this beloved version of the Nutcracker. I had a two-month-old baby when production started. I will never forget changing his diaper way up on the highest balcony of the theatre in Purchase, New York, when he decided to howl, as I heard the director Emile Ardolino yell, “CUT,” and look back to find the source of the disruption. Not my finest hour.

With all of this Lincoln Center experience, after I became a freelance designer full-time, I was recently honored to design two new productions of The Nutcracker. The first was for Devon Carney, the Artistic Director/Choreographer for the Kansas City Ballet. The company flew me in to meet Devon to see if we would work well together. I think we had each other at “Hello.” Devon suggested a lighting designer he knew from the Cincinnati Ballet. Then, we discussed the set designer. I have a dear friend who spent a number of years designing sets and costumes, but had moved on to children’s books and textile design all the while continuing his love of painting. We had recently had dinner and he had mentioned feeling like he would enjoy returning to set design work, if I ever needed a colleague. This seemed like a perfect opportunity. I suggested Alain Vaës and learned that Devon had known him and worked with him years ago. Our dream team was formed.

I think I made six more trips to Kansas City in over 10 months. We discussed budgets over the phone; I presented sketches first as graphite thumbnails, then full fledge drawings, and then painted renderings. Alain was inspired by the rooftops of Prague. I was inspired by children’s holiday book illustrations, which I thought would help me blend in with Alain’s luscious storybook images.

My assistant, Ricky Lurie, started to swatch materials in New York City and eventually fabric would be purchased and delivered to six different shops in New York and also shipped to  companies in Kansas City, Houston, Denver, Ohio, Chicago, Upstate New York, Georgia, and the costume shop at The Kansas City Ballet. Fourteen shops in all created the wonderful costumes based on my sketches. It was a complicated puzzle just trying to organize fittings with all of the different drapers, tailors and milliners, but I love puzzles.

Ricky’s father owned a trucking business, so we managed to hire him to pick up almost everything with Ricky by his side for the road trip to Kansas City. Once unpacked at the theatre, wardrobe had to perform final fittings on everyone. We had some issues with Mother Ginger and the Nutcracker head, but all of the traditional costumes were ready to go.

The week flew by, and when we finally opened, after the curtain came down, remnants of snow flakes stuck to our dampened cheeks wet with tears.

Two days after opening night, I said yes to another Nutcracker! This time, with Jean-Pierre Bonnefoux at the helm, and with Alain and Ricky in tow, we started a new adventure at the Charlotte Ballet, but that’s a story for another day.