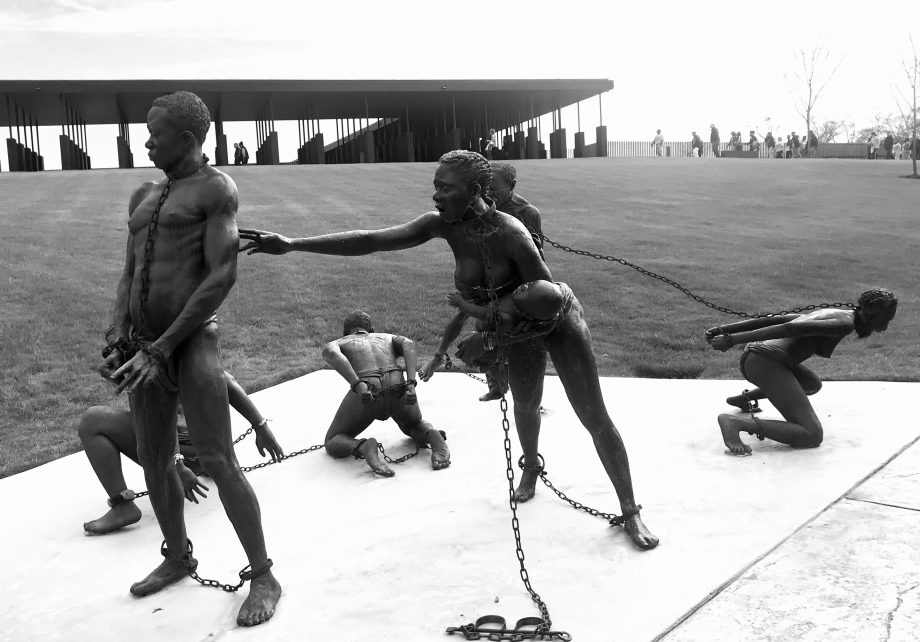 Following in Their Footsteps

The 1960’s. . . where was I? In Brooklyn, married for a few years, with a baby and toddler. Around us swirled the movements and politics of the time – in the South: bus rides, sit-ins, peaceful protests, and violent responses. My husband and I were frequently glued to the TV, watching Black Americans, and those White Americans who joined them, in trying to right the atrocities that continued 100 years after the end of the Civil War. Our heroes were gone: President Kennedy, Dr. Martin Luther King, Bobby Kennedy. But we were two young parents struggling to make ends meet and do the right thing for the children we brought into the world. Sympathy, empathy, anger – but there were no marches for us – just an occasional check sent to a worthy cause.

A recent experience led to new awareness and a promise to become more active. My husband and I took a trip South with 50 fellow members of Teaneck, New Jersey’s Temple Emeth, and our Rabbi, Steven Sirbu, serving as a guide on the Civil Rights Trail in Alabama. We flew to Atlanta, where part of the group had spent the previous day, then traveled to Birmingham, Montgomery and a side trip to Selma. I had been engaged during the years of protests, sit-ins, and demonstrations, but now I was about to be immersed in a shameful history through this eye-opening journey.

Emanu-El, a Reform congregation that goes back more than 100 years. Our hosts were warm and welcoming, and yet the visit raised questions: What is their role in Alabama today where, according to our local guide, every elected judge and state and national legislator is White? What was the role of their ancestors during the years of King Cotton and slavery, and during and after the Civil War? How many of them today, who should share the mandate of Tikkun Olam – the Jewish concept defined by acts of kindness performed to perfect or repair the world – are committed to that? How many, I wondered, voted for Trump, and do any have buyer’s remorse? I left with a nagging sense of guilt, questioning my own years of “passive action” as an armchair liberal.

The next morning was a visit to the 16th Street Baptist Church for a talk and film that left no one dry-eyed. We heard graphic details and watched footage of the bombing that left four young girls dead and no one brought to justice until years later. We walked in nearby Kelly Ingram Park and saw statues of the leaders who were committed to peaceful protest and of victims of fire hoses and dogs. There were plaques in the grass with inspiring words – including some written by 15-year-old Anne Frank, who understood Tikkun Olam: How wonderful it is that nobody need wait a single moment before starting to improve the world.

Our emotional day ended at the Alabama Shakespeare Festival in Montgomery, where we saw the powerful play, Nina Simone: Four Women. The music and dialogue transported us back in time to the bombed Birmingham church highlighting the trouble, courage, and hope of four completely different black women.

A ride to Selma was next, with a moving visit to the National Voting Rights Museum and Institute.  Memories shared by a docent who was a young boy in the turbulent 60’s became real as we looked at water fountains labeled White and Colored and images of those who shared the struggle that still continues – for integration, voting rights, and equal justice. We went to the Brown Chapel AME Church and followed the footsteps of those who came before us, across the Edmund Pettus Bridge. We met with 50% of the congregation (two of four remaining members) at the historic Temple Mishkan Israel and heard stories about school integration that were the opposite of what we had been told earlier at the Voting Rights Museum. We were puzzled by the conflicting accounts and dismayed with the condition of the temple, and with the ghost town that Selma has become – a town that should be preserved so that future generations can remember what started there under the leadership of Dr. King.

The Legacy Museum and National Memorial for Peace and Justice in Montgomery confirmed the feelings of collective guilt over a domestic holocaust that started with slavery, continued with beatings and lynchings, and is still seen today as racism, mass incarceration, and excessive use of the death penalty. At a debriefing in the offices of the Equal Justice Initiative someone in our group asked, “What can we do?” The answer was, “Listen to stories, and use those stories in advocacy. . . Remember, we all live in the legacy of slavery.”

After five intense days in the South, we were not the same group of 50 men and women who returned home to New Jersey. We were moved beyond our expectations and were inspired to become more actively involved in the Civil Rights struggle. Although many of us felt hopeless and helpless, we were all resolute about the need to do something. With eyes opened to a shameful past, we took a pledge at the Southern Poverty Law Center, adding our names to a wall with thousands of others and promised to help undo centuries of horror and injustice. We know that with greater understanding comes greater responsibility – to “listen to stories,” to work for change, to help make the world a kinder and better place for all.