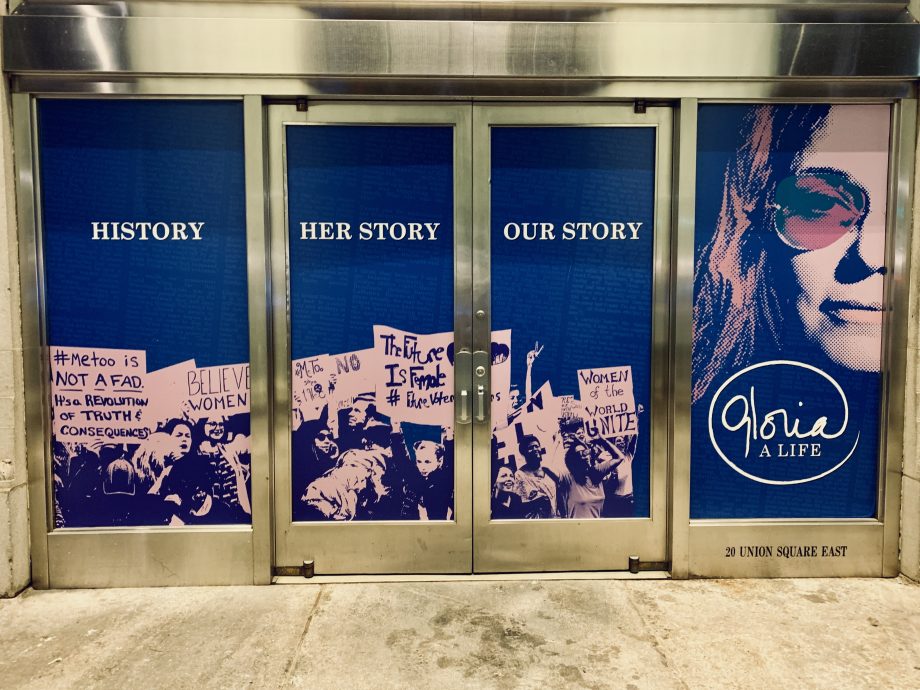 Instead of watching the State of the Union speech, I went to the theater and saw Gloria: A Life, written by Emily Mann, the award-winning director and playwright and a past guest on Conversations with Creative Women. The staging at the Daryl Roth Theater in Manhattan’s Union Square was unique – seating all around with two huge screens on either side featuring content to enhance what was happening on stage as the small, all-female cast chronicled the life of the iconic Gloria Steinem.

What resonated with me was how often the term “hope-aholic” was used to describe her. It’s no secret that Gloria has lived through decades of injustice, inequality, despair, but her perpetual optimism, determination, and commitment to fight on behalf of women were her driving forces. When at times hope seemed all but lost, she always found it, kept a piece for herself, and shared the rest with those around her.

She has always lived by a code of truly intersectional feminism that has taught her how to use her privilege as a white woman to meaningfully lift up those around her, especially those most marginalized in our society. The play itself may be about Gloria, but it elevated the work of equally important women like Dorothy Pitman-Hughes, Florynce Kennedy, and Wilma Mankiller, who was played by DeLanna Studi, a citizen of the Cherokee Nation.

At the end of Patricia Kalember’s powerful performance as Gloria, the icon herself joined the cast for a 20-minute Q&A. Many in the audience expressed their admiration for her, one woman said she is running for local office, and others expressed their deep anxieties about the times we’re living in now. Gloria took all of it in stride – she acknowledged those fears, made everyone in the room feel heard, and offered the same optimism she has throughout her whole life. Finally, the rest of the cast asked one thing from us in return: to do one outrageous thing the next day in the name of social justice. They said it could be anything from refusing to pick up our husband’s dirty underwear off the floor to talking about salaries with our coworkers to running for office.

On the subway ride home I thought about this question and while doing so my phone would buzz with updates from my friends about the State of the Union, which included fear mongering, racist sentiments, and lies about women’s health services. I cringed and felt the hope beginning to drain from my body. But then I asked myself again, “What would I do that’s outrageous in the same of social justice?” And all I could think of was… kindness. I realized that the most outrageous thing I could do the next day was approach the world with unwavering kindness. And that is exactly what I did and you know what, it felt liberating. It felt contagious. It felt as though I too was keeping a piece for myself to carry me through while also sharing it with those around me in the hopes that they would too. I don’t know if they will, but hey, maybe I’m becoming a hope-aholic too.

What outrageous thing will you do today in the name of social justice?