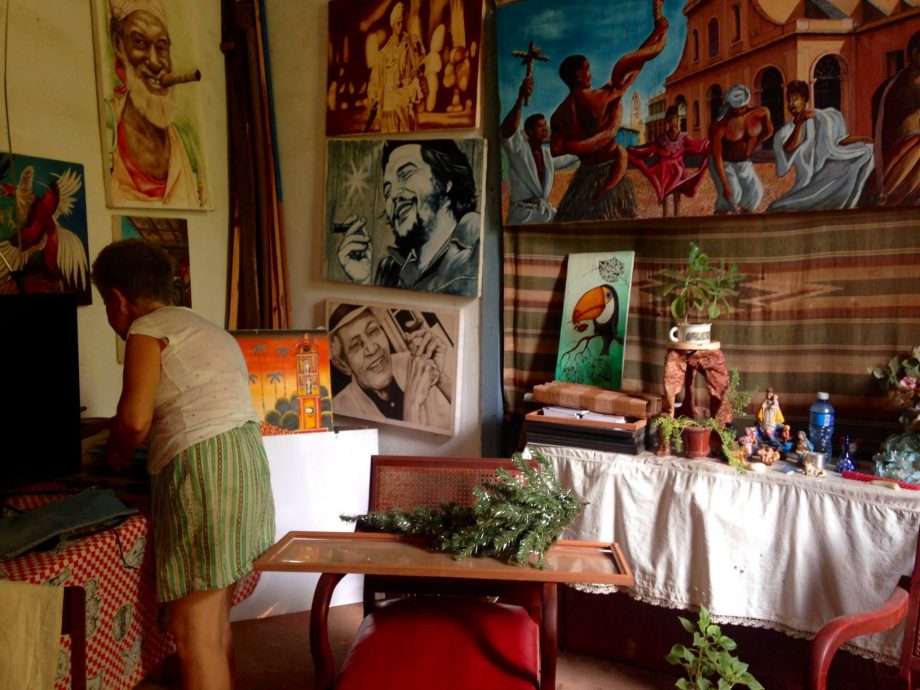 WE ROUNDED THE corner of Plaza Mayor in Trinidad, Cuba, melting slowly as the heat bounced off the cobblestones onto our translucent skin. We had 15 minutes or so before our tour group was leaving for another excursion. Down another alley was a blue half door. I peered into the dimly lit room and came upon a magnificent painting of a woman wearing a headdress in the shape of a snail curved around her body – lines and leaves coming out of her sides – all set against a brown background, the same color and feel as the earth.

“Hola,” a small, old woman came to the door with wise wrinkles under her eyes.

“Muy bonito,” I tried to say, “very beautiful,” in my very limited Spanish. She laughed quietly, politely and invited my friends and I into her foyer.

We were surrounded by amazing paintings of different styles; pictures of women with every curve and crevice exposed, shaped, lined perfectly as if Mother Earth was standing there in front of us herself. The old woman in her striped, green shorts and thin white shirt pointed to a painting in the corner of a woman sitting with her hands around her knees. Leaves seemed to be sprouting from the ground behind her growing tall to create a shield above her. As I moved closer to the painting, I noticed its texture.

“What’s this made of?” my friend asked.

“Coffee grounds, dirt, and tobacco, all natural materials,” she explained to her in a low, soft voice. We all offered a collective gasp at her majesty.

We looked around the room battling in our minds as to whether we could afford to take home a piece of this woman’s livelihood.

“Cuanto cuesta?”  How much, I asked as I pointed to the piece with the fertility woman that I hadn’t been able to take my eyes off of since we were invited inside.

“Forty-five, but I can do forty,” she told my friend who speaks much better Spanish than I do. I looked back at the painting, then at the woman. Her authenticity seemed to permeate from her. “I’m not going to find this anywhere else,” I thought to myself.

“Yes, I’ll get it.” I told the woman as I handed her the money. She nodded ever so slightly and ushered me to follow her into the next room.

I followed her into the adjacent room where there was more art on the walls featuring bold colors, scenes from La Habana and Ché. There were no windows just open spaces in the walls leading to a jungle oasis right outside her door. Light was pouring in reflecting off the brush strokes of the paintings in the house. As she wrapped my painting ever so carefully in thick cardboard-like paper to protect my piece of her for the rest of my journey, I fantasized about a life as an artist in a foreign land as if it were a real possibility.

We chatted for a while until I finally asked to take a picture with her. Flushed, she politely accepted my request. It was obvious she had not been asked this question often. We stood in front of the painting that led us to this wondrous interaction and smiled. I told her how grateful I was and said, “gracias,” repeatedly until my friends ushered me to leave so we wouldn’t miss the rest of the group. “She needs to go about her life,” I thought to myself, “don’t be so ridiculous.”

We walked out and I felt a sense of admiration come over me. I knew I would never see this woman again, but I thought about how I now had a piece of her to watch over me. And now as I look at the painting across from my bed, I think about my time away and remember just how lucky I am I have met the small, old Cuban woman with the sweet, quiet voice in the middle of Plaza Mayor.