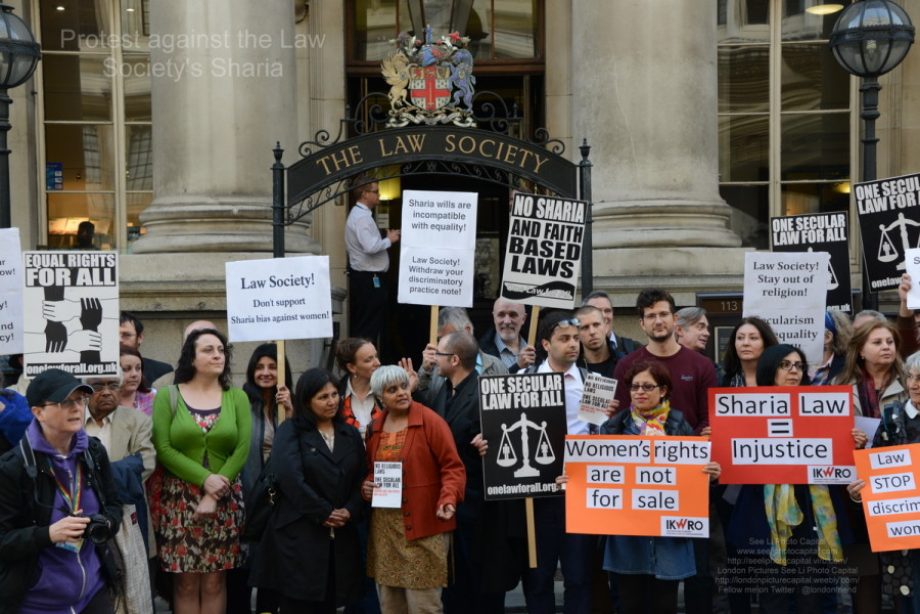 Why Are British feminists being called Islamophobes?

Houzan Mohammed, a Kurdish woman who is a representative of the Organization of Women’s Freedom in Iraq, made that proclamation at the recent Feminism in London conference. She was on a panel of four feminists called, “Unlikely Allies: Religious Fundamentalism and the British State,” that focused on the connection between Islamic fundamentalism and British law.

I attended this panel to hear Maryam Namazie, an Iranian Muslim-born woman who lives in London and is a spokesperson for One Law for All, a group that opposes Sharia law in Britain. I was unprepared for the bluntness of the talk about ISIS and the extreme pressure progressive feminists are putting on these women to be silent and to curb their critique of what they see as an untenable situation for Muslim women there.

When Namazie said that “We need to reclaim the left and feminism,” and that it is a “historical task and necessity,” the audience erupted into applause. Clearly this is an important topic of discussion in the UK.

But why would these women on this panel feel the need to reclaim feminism? Because they are branded as Islamophobes by progressives and feminists in the UK for their criticisms of Sharia councils and Islam.

Sharia councils have been in existence since the 1980s in Britain. They are not legal courts, they are religious tribunals. They give advice on family disputes and can grant an Islamic divorce, but not a civil divorce. (An Islamic divorce would not be recognized by British law but it is honored and considered legitimate in Muslim communities in the UK). In closed Muslim communities within the UK, these councils hold power over Muslim citizens even though they would not be legally binding in a British court.

The increasing use of Sharia councils has alarmed critics, prompting some of them to say that the decisions by the councils are keeping Muslim women separated from British society at large and under male religious control. The councils are fraught with controversy and conflicting beliefs around religious freedom and secular space in a Western democracy. Indeed, there have been instances where women have been advised to give up their custodial rights to their children to abusive husbands. However, the overall criticism by these panelists was that male-dominated religions should not rule women’s lives, and that British law should be the only law. In short, these feminist critics of Sharia councils fight for a secular society.

Another panelist, Gita Sahgal, founder of the Centre for Secular Space, said “Sharia councils have become parallel law enforcement mechanisms [to British law],” calling the people who defend the use of Sharia councils as “religionists” who use “multi-faith terrain” to keep women enveloped by religious tribunals and, essentially, separated from democratic society. She sees minority needs being framed in accordance to religion by these progressive religionists who are using the word “Islamophobe” to silence critics.

I’m fascinated with the new dynamic that’s being created between what were once opposing groups – feminists and fundamentalists. But now some feminists are aligning with fundamentalism? I believe the use of the word “Islamophobe” is being used as a tool to shut down critical thought about male-dominated religions and the negative impact they have on women. As Namazie said, “Progressives no longer believe in free-expression, they believe in self censorship.”

So what does this all mean for me? I am Catholic and have long been a critic of the Catholic Church. Catholicism is rife with sexism. I consider it a male-dominated religion that preserves the top power spots for men. Moreover, the gown-wearing priests, who boldly opine on women’s roles in society and private lives, are just a religious variation on ‘mansplaining.’

To deny women the opportunity to be priests is discrimination. My right to say so does not make me a Catholic-phobe.

Mahmoud says of the word Islamophobia, “I think this in itself is racist.” She compared the well-worn history of progressives and feminists who have criticized religion as part of their feminist analysis of patriarchy. As a woman with a Muslim background she claims the same right. Yet these same leftists do not support her right to reject religion, as they would probably support mine.

She refers to these progressives as “white people [who] can ridicule, criticize and break away from Christianity.” She saw discrimination in the way liberals use Islamaphobia to shut down protestors because they are “people from a Muslim origin [who] reject their religion and all forms of religiosity.”

Sahgal said, “Multi-culturalism and multi-faithism shrinks secular space.” In other words, by seeing society as just a collection of homogenous groups of people identified by religion we deny their individuality as citizens.

Secular spaces are the realm of the feminist intellectual women and usually the realm of universities, too. But this is a shifting landscape.

On November 30, Namazie was shouted down at Goldsmiths, University of London by members, all male, of the Goldsmiths Islamic Society. She had been invited to speak by the Atheists, Secularists and Humanists Society. The protestors disrupted the talk, laughed at her and repeatedly stood up to create a distraction from her words. Members of the Atheists Society protected Namazie and confronted the protestors for their disruptions and disrespect. (Interestingly one of the females in the room apologized to Namazie for the disrupters. Namazie said to them that they didn’t have to apologize for anyone.) The protesters also turned off Namazie’s power point presentation when she showed a cartoon depicting Jesus and Mohammed.

Shutting down the presentation. Sound familiar?

At Goldsmiths, Namazie talked about the word Islamophobia, saying, “What it implies is a phobia against an idea.”

The next day after Namazie’s talk at Goldsmiths (she managed to finish despite the interruptions), the Goldsmiths Feminist Society wrote a letter aligning themselves with the Goldsmiths Islamic Society, in which they wrote, “We support them in condemning the actions of the Atheist, Secularist and Humanist Society and agree that hosting known Islamophobes at our university creates a climate of hatred.”

The word Islamophobia is also used here in the States to silence critics of Islam. Look at recent trends on U.S. campuses where some have had their speaking invitations rescinded due to protests by students who say that their safe spaces will be compromised if a particular individual is allowed to speak and presumably  say something that will offend. Some of these speakers who have been pressured by protesting student bodies to turn down college invitations, or have been disinvited from speaking, include some famous names –  Condoleezza Rice, Christine Lagarde, and the Somali-born author and activist Ayaan Hirsi Ali.

Ali, who survived genital mutilation by her family members and later fled Somalia, is an outspoken critic of the religion of Islam. Brandeis University was planning to award her an honorary degree, but some students protested because they considered Ali to be Islamophobic. The administration capitulated and rescinded the offer. Much like the author Christopher Hitchens, who hated religion, Ayaan Hirsi Ali has nothing good to say about Islam; but unlike Hitchens, Ali has had death threats made against her and has been known to have bodyguards.

We are living in a strange time of shifting allegiances, demands for censorship and pleas for safe space. And feminists, when they align with the male religions who attempt to shut down the anti-religion feminists, shrink the secular space.

In fact, a dramatic moment at the panel discussion crystalized the debate when towards the end of the presentation, as audience members were asking questions of these brave feminists, a white woman stood up and criticized them. She labeled them Islamophobes and then abruptly left the room, clearly not willing to engage in further discussion.

Mahmoud says in general of her critics, “Their criticism will not silence us, because we have a just cause, we own it, we know more about it and we continue to expose all religions for their hypocrisy and women hating.”

When feminist allies turn their backs on secular feminists in favor of allegiances with male-dominated religious groups, we are indeed living in the ISIS Era.

This piece was originally published on The Broad Side.