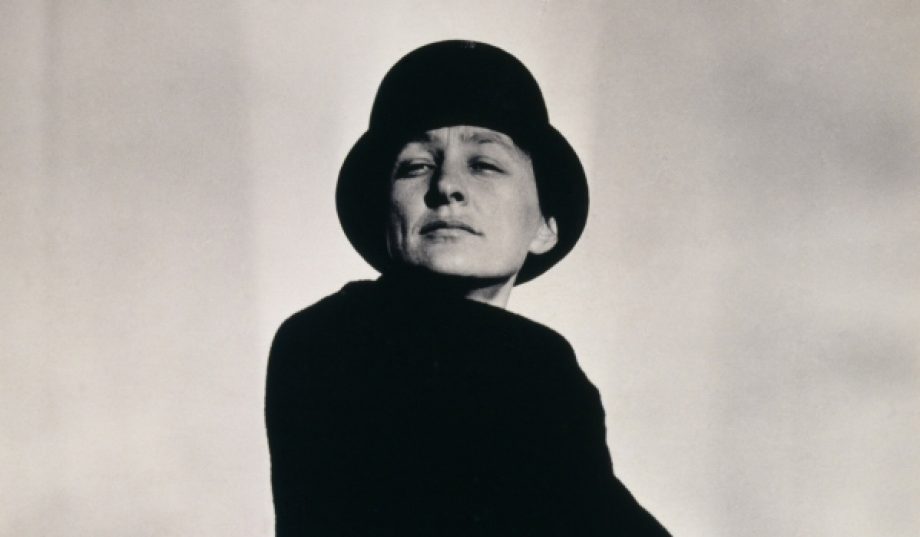 I PROUDLY ADMIT it. I’m a Georgia O’Keefe groupie. I just can’t get enough of this iconic artist. I’ve seen countless exhibits, visited the Georgia O’Keeffe Museum in Santa Fe and her Ghost Ranch and Abiqui homes. In fact, my daughter-in-law presented me with a beautiful 256 page, comprehensive, coffee table book, Georgia O’Keeffe And Her Houses – Ghost Ranch and Abiquiu. In O’Keeffe’s words, “I feel at home here – I feel quiet – my skin feels close to the earth when I walk out into the red hills as I did last night – my cat following along like a dog.”

So it was a no-brainer that I was going to spend time at the Brooklyn Museum’s “Living Modern” exhibition, even though a friend asked, “Aren’t you O’Keeffed out?” My resounding response? “No way!”

I spent 3+ hours walking from room to room, soaking up the paintings, the photographs, the clothing. I didn’t think it was possible, but I left with an even greater  appreciation of this extraordinary woman.

The Georgia O’Keeffe “Living Modern” exhibition is organized by guest curator, Wanda M. Corn of Stanford University, and coordinated by Lisa Small, Brooklyn Museum’s Curator of European Art Painting and Sculpture. I interviewed Lisa a while back for the Museum’s wonderful “Killer Heels” exhibit.

Lisa graciously agreed to be ‘interviewed’ on paper about Georgia O’Keeffe: “Living Modern.”

What was the catalyst/impetus for staging this exhibit? And how long did it take to put together?
It took the Brooklyn Museum around two and a half years to organize the exhibition, but Wanda Corn had been working on the project for longer than that. I believe she had been researching the subject for almost 10 years with the idea that it would be “just” a book. Then, several years ago, Wanda was talking with our former curator of American Art, Terry Carbone, and Terry had the idea that Wanda’s research could be turned into an exhibition. Terry left the museum soon after that and passed the duties of in-house curator to me, not because I’m any kind of expert in American Art (I’m not!), but probably because I had already worked on several successful exhibitions here that involved garments/fashion. It made perfect sense for the Brooklyn Museum to present the show for a number of compelling reasons, including: 1) we have an extraordinary permanent collection of American Art, including 14 works by O’Keeffe; 2) O’Keeffe had her first museum exhibition at the Brooklyn Museum 90 years ago in 1927; 3) 2017 marked the 10th anniversary of the Brooklyn Museum’s Elizabeth S. Sackler Center for Feminist Art, and we were marking the occasion with a series of special exhibitions. This exploration of O’Keeffe provided an ideal way to honor an icon of American modernism in a way that also had the additional advantage of “complicating” the feminist narrative by including the artist’s wardrobe. It also didn’t hurt that Wanda’s idea offered what we knew had the capacity to be very popular with our audiences; the “perfect storm” of a big, recognizable, and beloved name with a focus on clothing and self-fashioning, which are concerns that really resonate with contemporary audiences.

What did you learn about O’Keeffe that you didn’t know before?
I had no idea that her first museum exhibition had been here, so that was a revelation for me. And of course, I didn’t realize that she was such a seamstress, so this idea that Wanda develops so beautifully about how the sartorial choices O’Keeffe made were another aspect of her modernism was a fascinating discovery, as I think it has been for many of our visitors. And I was surprised to learn that O’Keeffe never traveled outside the U.S. until after Stieglitz died in 1946, and that then she went around the world several times!

How did you match the art, with the photos and her clothing?
This was the most fun part of putting together the exhibition! Wanda made such compelling arguments in her book, discussing the forms O’Keeffe favored in her art in connection to the forms and silhouettes that she favored in her clothes, that it was really easy to think about how to group these items in the exhibition. And, I had the pleasure of working on this exhibition with Matthew Yokobosky, the Museum’s Chief Designer, who has an incredible eye for how objects speak to each other visually in space. In a few cases we could be fairly didactic—we had photos of her wearing the same outfit in the exhibition, so we put those together. Or, as in the case of her black suits, we surrounded them with photos of her wearing black suits; although they might not have been the exact same suits we had on display, it helped make a very clear point about her penchant for dressing in a “uniform” for the camera. In other cases we went for evocative visual/formal groupings, like placing O’Keeffe’s early, hand-made cream silk tunics near photos of her wearing similar white dresses and abstracted paintings from the same era where she used a very limited palette of whites, blacks and grays. Or, one of my favorite pairings, a beautiful hand-made white linen blouse with an extraordinary leaf-like ornament at the neck hangs next to one of Brooklyn’s own paintings of two yellow leaves, and the formal resemblance is quite compelling. Another group has become an Instagram favorite: a striking Emilio Pucci dress with a geometric black and white ‘V’-pattern, a group of polaroids O’Keeffe took of a ‘V’-shape in the landscape of Glen Canyon, and one of her abstracted paintings of the ‘V’ shape made by the walls and sky at her Abiquiu home. All together, these objects really make clear her unified commitment to a particular form in her extended aesthetic universe.

What do you hope visitors will take away from this extensive, comprehensive, ‘different’ look at O’Keeffe’s life?
We hope that visitors who are already very or even a little familiar with O’Keeffe learn more about her, and that those who had never heard of her (there are some!) find in her a new and total badass hero! I hope, too, that the exhibition encourages people to see how profitable it can be to consider the interrelationship of all aspects of an artist’s creative life and how that can expand to include things like wardrobe choices, which in this case are clearly part of O’Keeffe’s overall commitment to modernism. Since the exhibition is very much about how O’Keeffe crafted her own persona, and the degree to which she cared about and controlled her image in the world, I also hope that visitors see how her investment and commitment to a specific “look”—which was about comfort, aesthetics, and dressing “modern”—was absolutely innate and not created for her by Stieglitz. She definitely learned much from him in their years together about posing for the camera, but as can be seen in her high school yearbook on view in the exhibition (from 1905, years before she ever met Stieglitz), she was already recognized as “a girl who would be different in style, habit, and dress.”

Can you share some of the most frequently asked questions about this exhibit?
People are fascinated by O’Keeffe’s sexuality. She was married for many years to Stieglitz and their letters to each other make clear that theirs was a very passionate, sexual relationship, at least in their early years together. However, she didn’t conform to conventional femininity and many of her clothes have a masculine, or androgynous appearance, so the question of how she identified or if she had sexual relationships with women is quite common. The Museum is actually going to have a blog post addressing the perceptions of her sexuality very soon!